So how does a guy from Boulder, Colorado, with a background in kitchen management and training in French cuisine, find his passion in sushi and Japanese cutlery?  Chef Elan Wenzel – local 20-year sushi chef veteran, high-end Japanese knife purveyor, and James Beard House invitee – is a man living his dream.

Born in Boulder and growing up in Louisville, Elan Wenzel is a Colorado native.  His parents are both artists; his father a potter, and his mother a former art teacher and current textile artist.  With his upbringing, Elan always assumed he’d go into an artistic career field – maybe photography.

That, however, was not meant to be.

In his junior year of high school, Elan’s counselor asked him, “Where do you see yourself going?”  When Elan shared his photography aspirations, she steered him clear of that path.  She offered, “How about being a chef?  You get to be really creative and earn $100,000 a year!”  (those of you in the restaurant industry can insert your chuckle here).  Elan took her advice, thinking, “Creative?  $100k?  I’m in.”  He was entered into a Career Development Center program, where he learned to run the cafeteria in a Longmont high school.  He realized that he loved working with his hands.  He also started getting noticed for his kitchen management skills, taking a gold medal for front-of-the-house and silver for back-of-the-house in the HERO (Home Economics Related Occupations) awards.  After high school, Elan moved up to the mountains to attend the Colorado Mountain College culinary program.

Despite seemingly effortless achievements in High School, Elan was in for some new growth experiences in college.

“Elan, people don’t really want to work with you.”

The first two years of his college career, Elan just didn’t perform at the level he was used to.  His grades were slipping, and he didn’t enjoy the program as he expected to.  And, he admits, people didn’t really even want to work with him.

Anyone who knows Elan now – cheerful, focused, humble, and supportive – will have trouble believing that.  He’s even been called one of the nicest chefs in the industry.  So how did he turn it around and find his love for the food industry again? 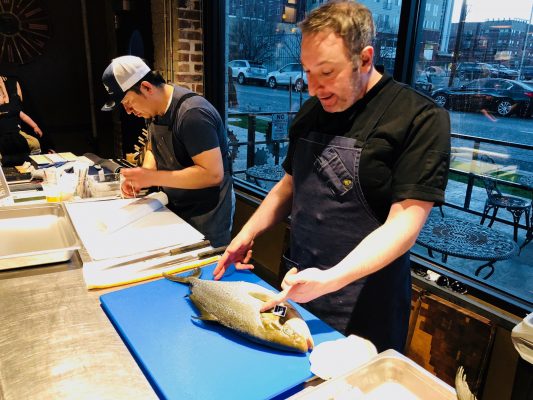 A mentor stepped in, and redirected Elan with some straightforward feedback (see above) and good advice.  With a renewed sense of purpose, in his junior year of college, Elan was back on track.  He joined multiple committees, formed an ice carving club, and became certified through the ACF (American Culinary Federation).  Reinvigorated, Elan used his positive focus to build friendships and community, and find passion again.  After a couple of years, it was time to leave the mountains.  Some friends got him turned on to the Wolfgang Puck restaurant at the Pavilions on 16th Street in Downtown Denver, so to Denver Elan went.

Elan was originally hired on at Wolfgang Puck as a kitchen manager.  On his first day, he walked in to find out they just lost their sushi chef.  He was informed, “Since you have to learn sushi anyway, we’ll just have you start at the sushi station.”  Elan had never made sushi; his training thus far had been focused on French-influenced fine dining.  Although having an appreciation for Japanese minimalism, he didn’t have any real grasp of the food or the culture.  But start on the sushi station he did.

How did it go?  Assuming you read the first paragraph of this article, you likely already know the answer.  “It was an immediate love affair,” says Chef Elan.  Eventually Elan relegated his kitchen management duties, focusing on sushi full-time. 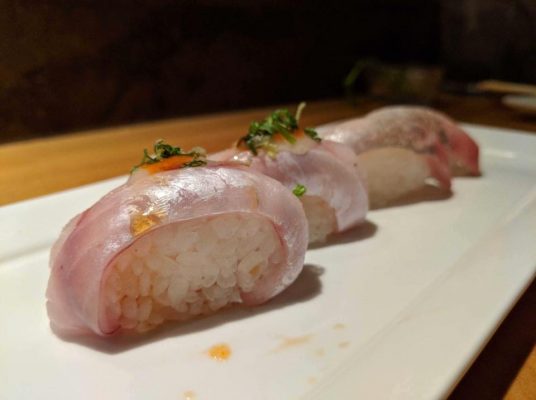 When Elan knew it was time to move on from Wolfgang, he was at another crossroads.  Elan desperately wanted to work under Kevin Taylor, who he considered to be the fine dining king of Denver at the time.  Or, he could move into a local sushi restaurant and continue his sushi training.

“I decided I wanted to focus on the art of sushi.”

Elan made the decision that would shape the rest of his career: he joined Japango as a sushi chef, and spent five years working between the Denver and Boulder locations.  He says that the experience was invaluable, learning from sushi masters with decades in the business.

Around this time, Elan also decided it was time to go to Japan to train – but he underestimated the cultural barrier.  “I had no clue.  You can’t just go get a sushi job there as an outsider,” Elan shares.  However, one of his patrons at Japango was moving back home to southern Japan, and his parents ran a small sushi bar.  Elan was invited to go work there in 2004, and spent about six months learning under them.  By this time, he had 5 years in the books as a sushi chef, and 9 years in the restaurant industry.  But the experience training in Japan shook him to his core. 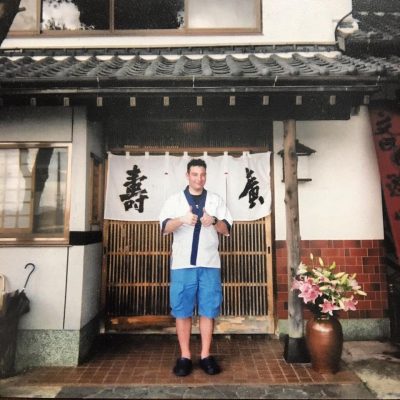 “I went in with an expectation – I guess it was ignorance, or youthful cockiness – but I thought I knew what I was doing,” Elan reminisces.  What was so humbling?  “Everything there was different: the PH levels in the soil, the altitude, the water.  I’d cut vegetables and they’d feel different on my knife.”  Humbled to the core, Chef Elan says he was re-inspired to a fuller, deeper appreciation of his craft.  “I decided I wanted to focus on the art of sushi,” he says.

While in Japan, Elan was also exposed to amazing Japanese-style knives and knife shops.  As a self-professed “gear head” and a chef, the engineering, beauty, and capabilities of Japanese knives intrigued him.  With Elan’s French cuisine training, he’d learned in-depth knife skills spending hours mastering various cuts: Carre, Burnoise, Parmentier.  Elan states, “I thought I knew knives, and was good with knives.  But I had no idea.”

“I fell in love all over again.”

Fast forward several years, and Chef Elan Wenzel found himself at his current restaurant: Sushi Sasa, opened by chef-owner Wayne Conwell fourteen years ago in the heart of Confluence Park.  As Elan shares with me, it’s typical to have out-of-town cutlery salesmen walk in to a sushi restaurant, pull out their wares, and sell what they will.  They come unannounced, so you never know when they’ll show up.  One of these salesmen, who walked into Sushi Sasa, was Ted.

Originally from Japan, Ted had lived in LA for forty years.  Ted sold Yoshihiro cutlery, and Ted wanted to retire and go back home to Japan.  Elan started accompanying him on sales calls, and began feeling an irresistible pull: “It was like when I fell into sushi – I fell in love all over again.” 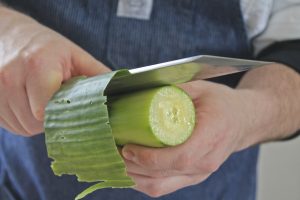 Ted eventually did retire, and Elan took up the business, becoming just one of two authorized dealers for Yoshihiro in the U.S.  Although traditionally used in Japanese restaurants, Japanese cutlery is finding its way into Western restaurants more and more.  Right now, Elan is focused on supporting and elevating the entire local restaurant industry and their experience in the kitchen through Element Knife Company and education.   “These are bad ass knives,” he says emphatically.

But life hasn’t all been sushi and Japanese knives.  Elan has also been tapped on the shoulder for some spectacular opportunities.

In 2017, Elan was approached by Leigh Sullivan from Denver’s Sullivan Restaurant Group.  Leigh developed and hosts the Denver Five.  The Denver Five, which has been running for eleven seasons, gives five chefs and two beverage experts the opportunity to create a series of dinners that are highly creative, and highly collaborative.  Seven dinners are held each season total.  Five dinners are held locally, one is held at the Aspen Food and Wine Festival, and the final dinner is held in New York City at the James Beard House.

“I’m one of those guys that puts his head down and works. I’m more reserved, and I have old-fashioned sensibilities.  I have no idea why she picked me, and I was honestly terrified,”  Elan shares.  But always open to learning opportunities, Chef Elan took advantage of the offer and jumped in full force.  “I learned a lot.  After so many years in sushi, it was fun to get back into the kitchen.  And I’d only been to New York City once before – and nothing like the James Beard House, and all its…James Beard-ness.”  I, for one, am impressed with the creativity he and his fellow Denver Five participants bring to the table.  In 2017, the theme Chef Elan chose was “Lost in Translation,” a mash-up of international street food and comfort food; they served dishes like pot pie churros, and miso mashed potatoes.  In 2018, Chef Elan returns as an alum.  On May 14th, Chef Elan Wenzel will be hosting his Denver Five dinner concept at Bar Helix, owned by sommelier and fellow Denver Five Kendra Anderson.  The theme: K-Town.  I can’t wait to experience their concept of Korean food! 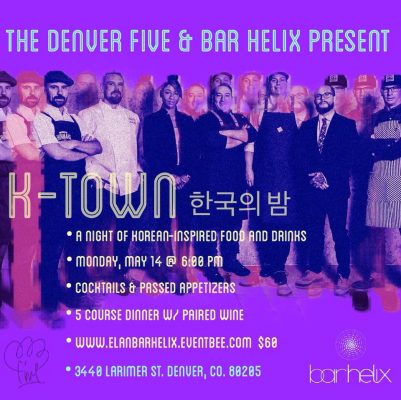 For his part, Chef Elan Wenzel continues his main love affairs of sushi and Japanese cutlery, while embarking on inspiring projects that keep him on his toes and recharge his batteries.  Chef, we can’t wait to see what’s in store for you next.

Denver Five: There are still a few tickets left to K-Town!  If you want to check out the concept, enjoy some Korean-inspired food, and meet some of the people behind Denver Five, grab your ticket here.

Sushi Sasa: For an incredible “art of sushi” experience, book a spot at the sushi bar with Chef Elan at Sushi Sasa. 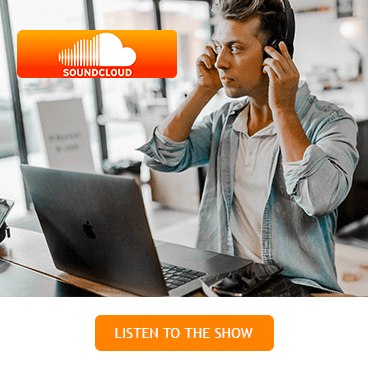